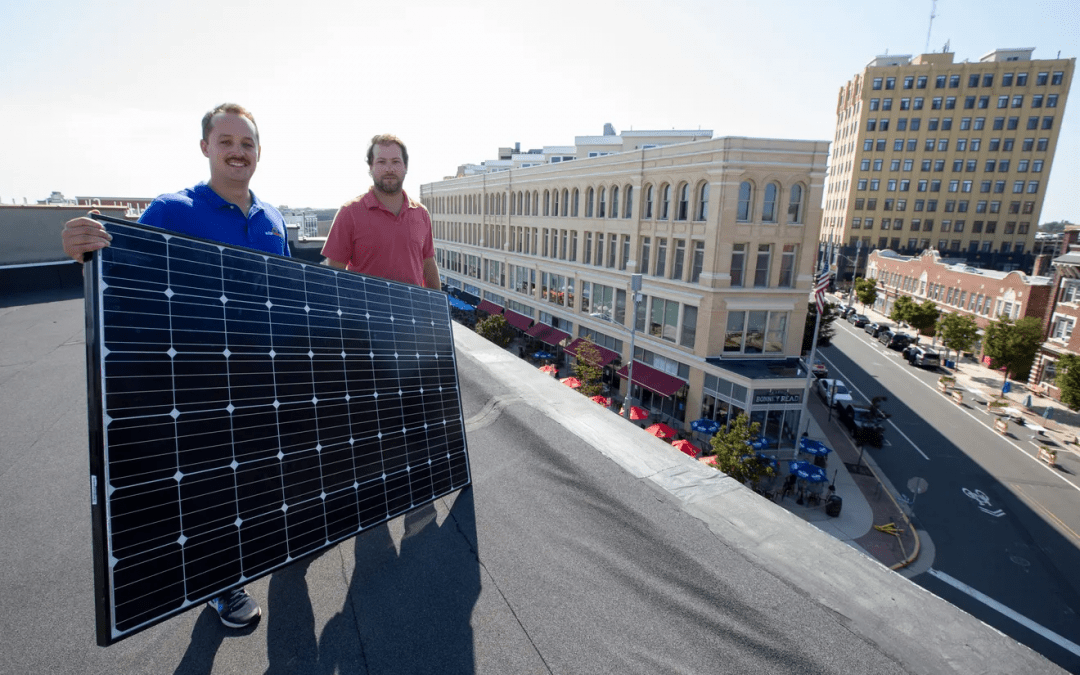 Growing up in Wall, Shaun Keegan and Corey Gross were best friends since second grade and did everything together — including going into business as adults and becoming co-owners and CEO and COO, respectively of Solar Landscape in Asbury Park.

While at college in Colorado, “I got inspired by the environmental focus out there,” Keegan said. Later, as a student at Drexel Law School in Philadelphia, “a roommate of mine was a solar panel installer, and it was at a time (2009) when the federal government was making financial incentives available on solar panels, so the market was growing.”

While dabbling in the installation of solar photovoltaic (PV) systems (a type of renewable energy source through which light is converted into electricity) in his downtime, Keegan worked at the Monmouth County Prosecutor’s Office and completed his law degree, but realized that his heart wasn’t in it.

“I decided to take the opportunity to start a solar business with Corey and pursue an industry we cared about,” Keegan said of his professional change of direction. While Gross, 35, got certified as an electrician, “We took his father’s company name minus the ‘Bart,’ borrowed one of his trucks, and sold Christmas trees out of the back in late 2011 to make the $10,000 we needed to fund our new business.”

“At that time, other providers would sell and design solar projects and we would install them,” said Keegan, who noted that one particular job installing a solar system on the roof of ESPN headquarters in Bristol, Connecticut, helped put them on the map as contractors.

Eight years after launching their company, “we’ve grown from two guys to 81 employees, have office and warehouse/construction space in Asbury Park and Neptune, and are one of the larger solar companies in the region,” Keegan said. “We’ve also gone from being installers and then general contractors to developers who originate/sell, build, and then own and maintain many solar projects.”

Among those are installations they’ve completed at commercial/industrial clients with flat roofs such as big-box customers BJs Wholesale Club and Target, retailers Chanel and Gucci, and a range of schools and municipal buildings.

“We provide solar design/build services to industrial buildings that can either choose to own the system themselves or enter into a power purchase agreement with us — an option that often appeals to schools and municipalities — through which we’ll take ownership of and maintain the system while giving them access to cheaper electricity,” Keegan said. “We’ve done over 8.5 million square feet of flat roof installations like these throughout New Jersey totaling over 100 megawatts of electricity, which is the equivalent of powering 14,000 residential homes.”

Another segment in which Solar Landscape is making inroads in New Jersey is in “community solar” projects. Through this arrangement which has recently been allowed in the Garden State, property owners can lease their rooftops to solar developers such as Solar Landscape to construct large solar projects that power their communities — not their buildings.

Through this model, “we’ll rent a roof from an industrial client, install a solar system, interconnect to the electric grid, and then sell the energy generated to homes, over half of which are low- to moderate-income households,” Keegan explained.

“Customers enjoy reduced energy prices, which are typically 10% lower than utility rates and can save the average household anywhere from $150 to $200 on their annual electricity bills based on their usage,” he said. “And with so many industrial, big box and e-commerce companies possessing massive rooftop space that’s essentially sitting idle, we’ll pay them rent for it, plug power into the utility grid, and turn their roof into a profit center for them. We also find subscribers, especially low- to moderate-income households, and are happy to help people access these projects in their area, even if they’re not our own.”

Path to a cleaner planet

In an era where electricity prices continue to rise, Keegan said that the solar opportunities his company promotes are a boon to both homeowners and commercial businesses alike.

“The Board of Public Utilities and governor fully support these programs and we’re grateful,” he said. “With solar power currently accounting for over 5% of the state’s energy and targeted to support 34% of its energy requirements by 2050, New Jersey is a great advocate of solar activity and PSE&G is among the most progressive investor-owned utilities in the country.”

Laying claim to installations from Massachusetts to Maryland, Keegan said that the pandemic hasn’t significantly disrupted Solar Landscape’s operations. “We were deemed an essential business from the beginning and, using recommended safety protocols, we continued working on the construction side and became remote on the office/administration side,” he said.

Looking back at what might have become a career in law, Keegan said that his current line of work is exactly where he wants to be.

“I believe in solar energy,” he said. “It’s clean air, job creation, and energy independence and we’re helping to reshape how the market distributes energy.

“The concept of distributed generation enables people to take more control of their energy and understand where it’s coming from and we’re proud to play a part in that,” he said. “We’re currently the largest owner/operator of community solar projects in the state and our goal is to stay that way.”

“Overall, I love being able to support our employees and their families and help those who have been underserved by the renewable energy market to get involved,” Keegan said of the most rewarding parts of his job.

“I hate seeing ugly emissions and pollution spewing from smoke stacks,” Keegan added. “Solar is the path towards a cleaner planet and we’re excited to play a vital role in the switch from fossil fuels to clean renewable energy.”